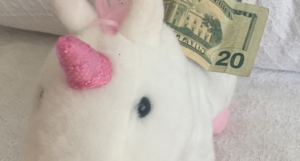 Having a great business, a great product, great people and a marvellously planned and plotted stratospheric trajectory, and meticulous mesmeric user journey is critical. Of course. But in order to get in the game, stand up and scale, “cash” and funds are still king.

In the land of unicorns and giants, the concept of organically, slowly, meticulously and methodically growing a business, through customer onboarding brick by customer brick, in order to gain a little revenue and profit, and slowly build a team and reinvest that in order to upscale slightly next year, is an archaic concept. It’s from the mindset of our parent’s and grand-parent’s generation, where they used to believe in saving up to purchase everything, avoiding credit at all costs. And that mentality and mindset from those same people was also running big businesses… The household (and company) would grow slowly and steadily.

Today, we take the credit to buy the product and goods now, immediately. US household Debt was $12.6 trillion in 2016, this tolerant ambivalence to personal debt is in the minds of the same people again that are running a business.

Undoubtedly as individuals and as businesses there are more ways to borrow today (and to borrow quicker) – A few years ago, Crowdfunding was a unheard of – but falling interest rates for savers looking for ways to make money and the tightening up of institutional lending, helped nature to find a way… and in 2015 that Crowdfunding avenue raised $35b globally. Now everybody holds a portfolio and can invest $10 to own a part of the latest Disrupter in the Pharmaceutical / Microbrewery Skateboard Delivery service… We can all be investors, in a vast range of opportunities, sectors and flavours. As investor’s there are no shortage of information, opportunities and risk levels.

Corporate America of the 50’s was all Car centric – giant manufacturers, producing, building and churning to get America moving. By 2010 it was shifting to Retailer centric – but a lot has changed in less than 10 years. The top companies in the US by Market Cap are now relatively young – Facebook is only 13 years old, with Apple, Google and Microsoft appearing on the top 10 US list, in the era of the Tech centric giants – and with Amazon moving into the high street through its recent purchase of Whole Foods – the really clever leaders are evolving again and planning for the future.

The Newer Tech wave of aggregators like Airbnb, Uber, Zomato and thousands of others, encapsulate the mentality of borrow now and build fearlessly. “If you build it they will come”, and when they do they will bring more money, build quicker and crowd you out (Didi Chuxing to Uber in China). So, you had better build it bigger and quicker, with much higher walls… This mentality is clear and obvious, Airbnb is 9 years old and has raised $3.4B in 10 funding rounds, Uber has raised $8.8B in 14 funding rounds…now that’s aggressive, and both now face mounting competition.

Despite the well-known stat that 1 in 10 start ups fail, the opportunity to invest in – and make vast returns, or build up the next potential unicorn has presented Founders with a real opportunity to grow their ideas into real businesses. Investors have a real choice and Founders need to come to the table with lip-smacking investor decks, that stricken investors with panic that they could miss out on the next Twitter…

With Uber making significant revenue of over $6B in 2016, the risks and returns are un-paralled. In fact, it seems that there are so many people starting businesses, that we ran of real words and names for companies – Lyft (surely Lift?), Zomato (presumably Tomato was taken?) – there are now 115 million small businesses in the world!

The advice from any good fund raiser or supporter should be the same – borrow what you need and know why you need it. Then go down two avenues– Debt through loans (bank / Funding Circle and variants) – means you keep control of your business, or a capital raise through Equity (Crowdfunding / Angel / VC / Private Equity) – others now have a share.

The current environment is such that, if you have a good idea, it means you are found, studied, copied and probably improved upon. The days of slowly and quietly building up a vast business, that has natural defences against competition are diminishing. Look at the food delivery business, now there is Just Eat, Hungry House, Deliveroo… As soon as you appear on the radar and seem to be doing something that is making waves, disrupting, or most amazingly making cash – you invite competition, everyone is looking over your shoulder and copying.

The days of slowly building up General Motors decade by decade are evaporating. General Motors shares are $34 vs $153 for Facebook… says it all really – Investors want vast and speedy returns… and if you have the people, product, plan, positioning and pitch – get on and do it quickly before someone else does… then start peddling even harder when it starts to work…